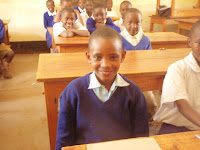 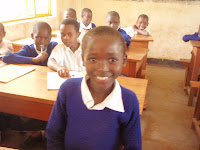 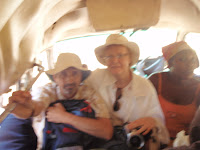 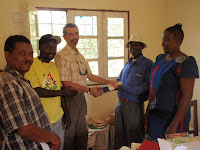 We had a day of rest yesterday and got the opportunity to visit a nearby waterfall operated as a tourist conservation attraction by Joseph. It’s called Kilasiya Falls and is quite spectacular to see during and after the steep climb down the gorge. On the walk back from the falls we met by chance 3 of our children; Rose, Tumaini and David… and we were all delighted to see each other. The children were happy to hear we’d be visiting them at their homes soon.

Today, since our destination was so far away in Marangu West, Joseph arranged a local taxi to come to pick us up and drive us there. The speed is no more than 15 mph on these roads with huge stones and holes…don’t know how these cars survive at all on them. We had an appointment to meet with a local group in Marangu called UMWI which was formed a few years ago with the purpose of helping the community, adults and children, who are suffering with HIV\AIDS. We met the director and his staff and learned all about the operation of this organization which has several programs such as Home Based Care, Psycho-Social assistance, Orphans and Vulnerable Child Care. We were received very hospitably and learned a great deal about dealing with the finances involved in giving donated funding to schools for childrens care. We also ascertained that none of our children are on their files.

From there, we took a daladala on to Kilaremo PS where 9 of our children are enrolled. The head teacher Mr. Tilya, was expecting us and we were led to the office for a meeting with him, Mr. Mosha (English teacher) and the staff member who handles the funds in the school. We explained the ABCD: Art Building Children’s Dreams vision and mission and told him the names of our 9 children. They readily agreed that these children were from very poor families and needed help. They were very happy to see that we had come with the purpose of paying the school costs for these children. The arrangement we had decided on earlier was to pay the costs of the childrens lunches for the year and buy their school uniforms and school supplies ourselves to save some money by buying in quantity. So, smiling photos were taken, agreements signed and receipts written, as we handed over 135,000 shillings (just over 100 dollars) which will pay for these 9 children’s lunches for 1 entire year! You can imagine how good that felt.

Then we were taken to the classrooms of the children: Adeline, Gabriel, David, Rose, Tumaini, Joseph, Arini, Godfrey and Delivina. At the first classroom, as we walked in were were treated to a song of welcome as the children stood up and greeted us. This was the kind of reception we got at every classroom. We took the children’s photos at their desks, and told them we’d be seeing them at their homes soon and we will be telling their parents or caregivers that they do not have to worry about anymore school costs for their children. Needless to say it was a joyful and rewarding time at the school.

One thought on “Visiting UMWI and Kilaremo PS in Marangu West”